Heather and I (Christopher) have been interviewed again, and I thought I should provide links so all of our wonderful fans don’t have to go hunting for them. We have also been working on our 2013 calendar of appearances.

Just a few weekends ago we attended the Salado Scottish Festival and Highland Games in Salado, Texas. What a time we had… As we were unpacking our truck to set up our tent at the fair grounds, Heather and I noticed that our tent frame had broken in transit, and without parts it was irreparable. With no tent frame, we rushed to the Walmart in Belton and then the Academy in Temple, before we found a tent we thought would work. After driving all the way back to Salado, we soon realized that this tent would never hold up to any sort of rain or wind (the roof came in layers, you see, with big openings where one layer overlayed another). This would not do… so we rushed back to Temple’s Academy and exchanged the tent. This one also, we found out, was not rated for wind or rain (you don’t learn these things unless you open the box and look at the directions inside… neither the website nor the box mentioned these important facts.) So, we used the roof and sides from the other tent (the broken one).

END_OF_DOCUMENT_TOKEN_TO_BE_REPLACED

Trouble Figuring out Which Books to Buy? Here’s Help!

My (Christopher) latest foray into Amazon.com and Barnes & Noble yielded duplications of our Morrigan’s Brood Series books.  But upon further reflection, I realized that the reason I was seeing double is because Triscelle Publishing is making the transition from one book printer and distributor to another.  As part of this transition, they are in the process of re-releasing our Morrigan’s Brood Series books, and Heather and I have been closely involved in this process.  It takes months for titles to change out there in distribution land, so it is not uncommon for booksellers to list the same title for the same format (i.e. trade paperback) for two prices, and for there to be a slightly different cover.  In order to alleviate confusion during this transition period, when old editions are retired and new editions are incorporated, I will provide a list of old and new ISBNs; this also includes eBooks.
END_OF_DOCUMENT_TOKEN_TO_BE_REPLACED

Free Giveaway 1, in honor of HPPD

We have winners! Heather and I tonight drew three lucky winners who will receive one signed book from our series, but each winner gets to choose which book she or he wins, whether it is Morrigan’s Brood, Crone of War, or Dark Alliance. As before, we will gladly cover the shipping for the prizes. Now, can anyone guess as to the identities of the winners? No? Alright… I shall write them. The winners of our free giveaway in honor of HPPD are:
END_OF_DOCUMENT_TOKEN_TO_BE_REPLACED 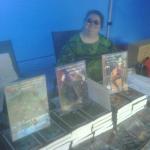 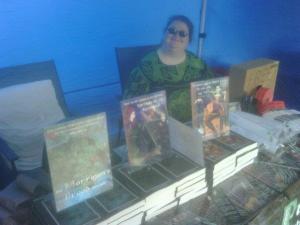 What an event! Heather and I (Christopher) just returned from HPPD, and we had fun! Good music (for the most part), good dancing, and great people. If you met up with us at HPPD, give us a cheer. Also, if you took pictures of us, please tag or or send us copies to post. We love pictures of us, not that we are narcissists, or anything like that. Thank you for stopping by our tent.
END_OF_DOCUMENT_TOKEN_TO_BE_REPLACED 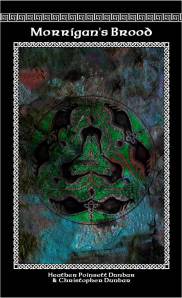 We know you are out there, and we would like to help you. OK… a show of hands of anyone who saw Dark Alliance: Morrigan’s Brood Book III and thought, “Gosh darn it, that sounds like a cool book, and it is so cheap, but books I and II are so expensive… maybe I should wait before plunging in… oh, and I hate eBooks…” Does this sound like you? (or at least some of it… OK, even if none if it applies to you, please continue reading… please.) Don’t worry, for we can help.
END_OF_DOCUMENT_TOKEN_TO_BE_REPLACED

The long awaited third book in the Morrigan’s Brood Series, Dark Alliance, has now been released in print form. This new book incorporates many of the characters from the first two books, but it is set in early 9th century CE, in fact 801 CE to be more precise, the year after Charlemagne became emperor (Christmas, 800 CE). For more information about the book, visit its Goodreads page.
END_OF_DOCUMENT_TOKEN_TO_BE_REPLACED

Well, I (Christopher) may be crazy, and foolish, but I thought our readers with them thar electronicmajigger devices would like to get a jump on reading Dark Alliance, Morrigan’s Brood Book III before the rest of us low-tech folks can buy the paperback book. So, if you want to dive into the version of our book that is based on 1’s and 0’s and not ink and paper, then by all means journey to one of the links below to buy a copy. I’ll even throw in links to our other works available in eBook format. Here it goes…
END_OF_DOCUMENT_TOKEN_TO_BE_REPLACED

News Update Where have we Been?

It seems Heather or I (Chris) need to write one of these “where are we now?” types of blog entries because we just aren’t avid bloggers. There… I said it. It’s not that we are lazy, yet you have noticed my use of contractions… I am Mr. Anti-Contraction, if you ask Heather, as I selectively edit out some contractions ;-). So no… we haven’t been lazy… just really really busy and focused. I am taking a break from burning my candle at both ends to at least provide some awareness as to where we are with this book three… Dark Alliance… coming out in September, as well as other stuff. Well, here it goes:
END_OF_DOCUMENT_TOKEN_TO_BE_REPLACED

The contest timeframe for entering is over, and we have drawn the winners.  As before, we combined entrants who stopped by our booth at ApolloCon and entrants who responded to our blog or Facebook announcements.  Without further ado, here are the winners:

Wow… lots of stuff going on right now. First, ApolloCon starts today and goes through Sunday. We will be there, so stop by. For more information about ApolloCon, click here.

In honor of ApolloCon, Heather and I will be giving away two ARCs of Dark Alliance, Morrigan’s Brood Book III. For those unaware, ARC stands for Advanced Read Copy. These are pre-released books sent out to reviewers. The ARCs have not yet been copyedited or proofread. Still, winners will get a sneak peak at the new novel, which will be released September 1. If you win and you don’t already have Morrigan’s Brood or Crone of War, Morrigan’s Brood Book II, well, we will throw those in as well. All books will be signed by us, the authors.
END_OF_DOCUMENT_TOKEN_TO_BE_REPLACED