I (Christopher) have been running ragged trying to book events for next year, of course as some of you in the biz know, some places won’t start accepting applications (or send you invitations) until 3 to 3 months out. However, one venue is way on the ball… Comicpalooza, and they are in late May… yet at this moment, vendor applications are available on-line. Wow… So, to finish off this year’s appearances, we have the Magick Cauldron this weekend, followed by Sherwood Forest Celtic Music Festival and HPPD in September and the Salado Scottish Festival in November. Heather and I are both working to add some smaller venues somewhere in that time-frame, so keep checking your calendar. Some of you recall that we had previously listed the Austin Celtic Festival, but because of their small size and that most of their prior years’ vendors came back, they had no room for us; maybe next year. For dates and links, visit our events page on our website.
END_OF_DOCUMENT_TOKEN_TO_BE_REPLACED

Space City Con this Weekend and other News 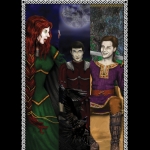 Lots of stuff coming up on the next few months, but nothing so impending as Space City Con! That’s right… *THIS* weekend is Space City Con, taking place in the Westin Galleria in Houston, Texas. Visit Space City Con for more information on the event. Heather and I will be signing books there, so bring yours if you’ve got ’em, but if you don’t, that’s alright… we can sell you some of ours. Come out and enjoy the fun! Nichelle Nichols, R.A. Salvatore, and Breandán Ó Ciarraí, among many other talented actors, celebrities, artists, writers, and others will be there. Oh yeah… and us.

The Saturday after that… next weekend, we will be at the Magick Cauldron for another book-signing. If you don’t like big crowds, but you still would like to see us in Houston, this would be a good venue for you. Plus, you won’t have to buy a ticket to get in (like you would with Space City Con). Visit our Events page for more book signing events we will be attending this year and next.
END_OF_DOCUMENT_TOKEN_TO_BE_REPLACED 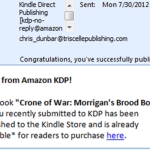 What a roller-coaster ride over the last few weeks. I (Christopher) usually don’t interject much of my personal life on this blog… I leave that to Facebook or just calling folks on the phone… but things have been a maelstrom around here of late. June 15, I was laid off from a contract job I had been working at for over 10 months; it was one of those out-of-the-blue, didn’t see it coming kind of layoffs. In my time off (well, before I was laid-off, but I never had time), I made it my mission to finish moving what was once known as Morrigan’s Brood: Crone of War from Lulu over to Lightning Source, where it would reside with a new ISBN and a revised name… Crone of War: Morrigan’s Brood Book II. As part of that move, I planned to massage the text a bit, giving it a good polish. Heather and I released a revision of the print book before I could finish the complete revision in order to restock books. Unfortunately, due to my work schedule and other things while I was working on my previous contract, I had little time to devote to the massaging of book 2.
END_OF_DOCUMENT_TOKEN_TO_BE_REPLACED

I (Christopher) have been giving the http://www.triscellepublishing.com website a bit of a content upgrade, in addition adding buttons for certain links, instead of text-based hyperlinks. I will go into more depth as to what website changes I have been making, I will show you where you can find out where we will be for our next book signings, and I will remind everyone of the free giveaway of our book of your choice through Goodreads. Click below for more:
END_OF_DOCUMENT_TOKEN_TO_BE_REPLACED 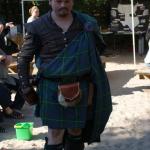 We have some exciting prospects coming up towards the second half of this year, though as in previous years, there seems to be fewer events we attend in Q3 and Q4 than we attend in Q1 and Q2. Still, plenty of events for you to come out and see us or listen to us read aloud. Let’s see… there is Space City Con, the Salado Scottish Festival and Highland Games, and even the Sherwood Forest Celtic Music Festival, among others. That’s another observation of our events… most of the events in Q3 and Q4 are outdoor venues, whereas most events we attended in Q1 and Q2 were indoor events. Strange.
END_OF_DOCUMENT_TOKEN_TO_BE_REPLACED

Oh no… not another one of those “Where have we been lately” kinds of posts. *sigh* Why can’t we just write stuff in this blog that other people want to read… like, you know… politics, religion, and football? Oh geez… Before going to Scotland for our honeymoon, my wife and I listened intently to a warning from a world-travel, which we heeded… When in a pub in Scotland (or anywhere for that matter), NEVER TALK ABOUT POLITICS, RELIGION, or FOOTBALL, or else we may be beaten to a pulp. Well, even though we aren’t at a pub in Scotland (oh, how I wish we were at this moment… or Ireland, for that matter), I suppose we have just chosen to keep out of those kinds of discussions on this blog. But hey, find us on Facebook, and we may have an opinion or two if you are really interested in hearing it, and we may listen (read) to your opinion with equal attention. Even thought I (Christopher) won’t be posting about those three taboo subjects, here are tidbits of stuff from previous and future events.
END_OF_DOCUMENT_TOKEN_TO_BE_REPLACED

Anyway, look below for our tentative 2011 to 2012 list of events for we authors of the Morrigan’s Brood Series:
END_OF_DOCUMENT_TOKEN_TO_BE_REPLACED