The Baton Moves to the next runner

`Now it’s my (Heather’s) time to take the baton and run.  Hopefully the journey of the baton will continue and be an exciting endeavor for both the authors and the readers. 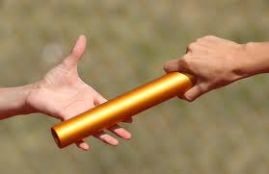 I have gratefully accepted the baton from one of my favorite authors, Ruth Davis Hays.  She writes the thrilling Translations from Jorthus series, which I feel is quite an original tale wherein the main character is female and does not wield a sword, sling arrows, or throws spears at her enemies.  Lylith, a human spellsinger, learned in the majiks, is not a warrior, but she has a strength that many warriors would envy.  Plus, there’s that hottie D’harromar… mmmm mmmm!  Anyways the best thing to do of course is READ the series.  The books are The Dawnstone Tale, and The Convergence.

Ruth also happens to serve as our final editor and she catches a bunch of errors for us.  She helped greatly with the work on Curse of Venus and now is helping us with the editing a novella and a few other side projects.

I’m also very excited that Ruth is going to be at the Triscelle Publishing booth at Aggiecon selling her series!!!  Fun will be had and stories will be told.

Now to get to tooting my, rather our own horn, as I co-author the Morrigan’s Brood series with the kilted hubby otherwise known as Christopher Dunbar.

Now the four questions that must be answered before the baton moves on!

Wow… what am I not working on?  Right now, Chris and I are working on the first draft for Dynasties of Night: Morrigan’s Brood VI.  It involves dragons, and blood-drinkers from the far east who have been fascinating me for quite some time!  I am in the middle of typing a draft of this book (the first draft is written out on notepads – that’s how we roll I guess).  We are working on getting an anthology to print that will involve librarians.  Letsee… I am taking classes on InDesign, a program publishers use to create the layout for books both print and e-book.  We are working on getting Shards of Light:  Morrigan’s Brood V to print before the end of the year.  We are looking into moving our tales into the realm of audiobooks.  I am urging a friend to get her drafts together so we might have a book about other beings in our universe.  I am looking for a new job and I’m listening to the wee kitty Brigid play in the bathtub.  She sees her reflection in the shiny tub and chases herself around… okay so that’s not something I’m working on, but cats make you take on their work too.

As for what’s happening in our world… Julien has discovered something shocking about his parentage.  Marcus is trying to keep it together.  His family is wondering how to deal with Marcus and his issues.  Mandubratius is… having fun.  Let’s face it, that’s his goal in life.  He is a hoot to write for most of the time, though it’s a bit like herding a cat.

2) How does our work differ from others of its genre?

I always tell people that Chris and I write historical fantasy primarily focusing on beings that come from the Celtic countries.  I suppose what we do differently is to bring in mythology from all the ancient cultures that we love (getting to the new world one of these days).  We also bring in blood-drinkers of these ancient cultures and just sort of let them run wild and see what sort of problems they can get themselves into.  We do work hard at fitting the history into the tale and I love weaving historical figures into the series, such as Emperor Charles (Charlemagne).  One of our editors, Sally, said that we don’t write the typical vampire horror stories, we write adventure fantasy where there are blood-drinkers involved.  The blood-drinkers aren’t vampires.  Vampire is a slavic term for the undead.  Our characters don’t move around at night, killing victims.  Most of the time, our characters like to feed off several people or beings because why kill something that can feed you tomorrow night?  Also, they don’t mope about their changed existence.  They have duties and goals set forth by deities or their leaders.  In addition, there is no sparkling.  Some may be beautiful, but some are related to beings such as the fae who can be very beautiful or sometimes quite ugly.  Generally we can be found at sci-fi cons or Celtic festivals.  Our series is becoming known locally, nationally, and internationally through word of mouth.   Which is very exciting.

I’m not sure.  Chris and I generally don’t read a lot of historical fantasy.  Granted, I love Game of Thrones, but that’s not exactly what we write.  I was greatly inspired by traveling overseas to Europe.  I loved learning about the ancient peoples of Britain and Ireland.  I’m a big history nerd and I love the mythology of these places too.  I have always enjoyed a good vampire yarn and thought that the myth seemed a bit tied down to the slavic countries where the beings were undead and gruesome.  I thought it might be fun to see beings from other countries who drank blood and see how cultures could clash.  I guess we write this series primarily because it is so much fun for us.  It brings us great joy.

4) How does your writing process work?

Well… it’s a little confusing.  Chris and I write the first draft together on notepads.  Then, I type it out and add historical nuances and it becomes the second draft.  Chris looks it over and adds more and edits the second draft.  Next, it goes to one of our editors, who reads it and sends it back to Chris.  Then we go through the edits and accept the changes or sometimes rarely, we reject them.  Then it gets published.  It’s a magical process that sometimes makes us tear out our hair, but no big deal.

Serenity began writing short stories when she was 7 years old. She illustrated these stories as well, even though now she admits she can’t draw. She turned from writing after the loss of a beloved notebook, and threw herself into drama and has acted in several roles on the stage and in front of a camera.  In 2013, Serenity started writing again full force and has two books currently available with another on the way April 1, 2014.  Serenity is the wife of an author. She is mum to 3 boys, currently aged 21, 17 and 2.  In the little free time she has between family and writing, she enjoys gardening, reading, crafting things, henna art, and watching such shows as “Burn Notice”, “Covert Affairs”, “Warehouse 13″, “Law & Order SVU”, “Touch”, “Kitchen Nightmares” and others.  Her works can be found at Amazon and Barnes and Noble.

Wendy Van Camp is the writer behind No Wasted Ink. She makes her home in Southern California with her husband and an australian shepard. Wendy enjoys travel, camping, bicycling, gourmet cooking and gemology. Currently, Wendy has published two short stories in literary magazines and is working on a steampunk science fiction trilogy.

Anyways… I hope you enjoyed learning a bit about Chris and I.  I cannot wait to see what answers we see for the next runners/authors!

Blog Hop: THE NEXT BIG THING 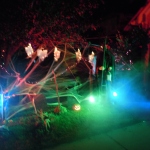 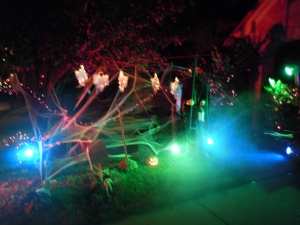 Welcome to the Cemetery

Welcome to our blog this weekend after Halloween 2012! We had a wonderful Halloween… how about you? Please feel free to comment. If you have found Heather’s or my Facebook profile, we will be posting pictures from our Halloween.

Well, Heather and I (Christopher) decided to join a blog hop with other authors we know across the USA. We each have been answering the same questions about our latest books, and I will provide links to our fellow authors’ posts here: